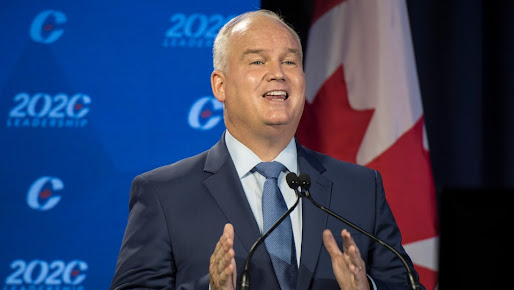 Truth is, the election did not go as well as possible for the Conservatives, but it didn't go well for the Liberals, NDP or Greens. About the only party it went well for was People's Party of Canada - albeit with no seats to show given our outdated first past the post system of electing governments. That's the hard core truth. It was more of a statement to the old guard, the back room boys, the establishment. The message went something like this: "we no longer trust any of you.

If the Conservative Party wants to fire some folks, the very first person that should be fired is the one who told O'Toole to constantly hold his hands in a prayer position during the English language debate. Each time O'Toole brought his hands in this position it was as if he was pleading, or even praying, or simply being patronizing. In my humble opinion, the body language O'Toole used (which no doubt he was trained to use or failed to listen to advice not to use) throughout the debate made him look, well, weak. Wishy-washy. Somewhat disingenuous. This is where the house cleaning needs to start.

Secondly, the campaign strategists ought to be fired. The failure to secure well-known and popular candidates in the Toronto area was disastrous. No disrespect intended, but people in Toronto and area seem to want candidates of national, or at least provincial prominence. A strong Toronto caucus they are sure would not be swept away for the regional interests of Quebec, the West or even the Atlantic provinces. The Liberals are famous for this recruiting. People like Ken Dryden or even most recently Adam van Koeverden. It's no secret to the rest of the country that Ontario, and especially Toronto, see themselves as the centre of the universe within Canada - they want representative that fulfil their egos accordingly.

Thirdly, fire the strategists who believe campaigning as Liberals is better than campaigning as Conservatives. When Conservatives campaign as Liberals the electorate vote in the real Liberals every time - even if they are getting wiser and not giving them majorities. Conservative strategists were given the mother load of ammunition to use against Trudeau while still being able to represent their base faithfully. For example, Trudeau's father (the recent Trudeau junior was selected as Liberal leader and PM) helped craft and institutionalize the Charter of Rights and Freedoms which championed the rights of the individual over those of the the majority. It has become a part of who we are. The covid panic has helped throw those rights on the ash heap of history until the Supreme Court of Canada rules on them. What an opportunity the Conservatives had to take the mantle of "Defenders of the Charter". The Liberals, especially the "Trudeau Liberals", would be without their moral high ground. That would then be the Conservatives high ground - for a long time.

Speaking of the Supreme Court, why did strategists not go after Trudeau in the debate with the following question: " Given the federal government has immediate access to the Supreme Court for constitutional references, why didn't the Liberals request a reference by the Supreme Court on the constitutionality of coerced vaccinations and "vaccine passports" before they endorsed and attacked people for not using them?" In order to gain the high ground you have to trap your enemy in the high questions. It paints them. It stains them. The perception lasts. In politics perception is reality.

The sad truth for the Conservative Party is it is not thinking and acting like a machine with a purpose. It is not capturing the high ground, or setting the ground for battle, because it seems frozen in fear that it might somehow alienate this group or that. You should not be arrogant about your beliefs, but you can be firm in them - and people respect that more than wishy-washy pandering. People become sickened by this type of "tell them anything" approach, which is why Trudeau has had two consecutive minorities. He lied the first time around about changing the first past-the-post system, amongst other things, and now people view him as wishy-washy too. However, he is cutting big cheques to a lot of groups, as we saw just before the election, and those groups want to see the cash continuing to flow. They aren't with Trudeau on any high ground, and the Conservatives failed to grab any high ground, so there was no need to change the status quo - and they didn't.

Looking ahead. Firstly, the Conservative Party needs to wrap its arms around Erin O'Toole and his family and give them the love. Rarely, if ever, have I witnessed a leader so genuinely disappointed in an election result as O'Toole displayed in his concession speech. Secondly, the party needs to realize that the Liberals have a lame duck leader now, and that in order to get rid of him the Liberals will have to firstly convince him to resign and hold a leadership race. That can be very destabilizing in a short period like the life of a minority government. It also opens up all kinds of potential negativity - internal or externally injected... Secondly, the Green Party will also be having a divisive leadership race, and to say their leader will go quietly into the night would be politically foolish. The NDP may also have some leadership challenges of their own. The Peoples Party, well, that appears to be completely reliant on Mr. Bernier's leadership. If the Conservative Party can restrain itself from an undisciplined assault on its leader, rally around the flag, and strategically prepare, it will be the party of order in the midst of instability.

Finally, Mr. O'Toole must change some things as well. He must drop the vision of the Conservative party. To say the Conservative Party was no longer the "party of your father" was foolish in the extreme. It was a direct insult to the majority of its base. Whoever gave him that line should be fired immediately, and sent directly to the Liberals. If it was him, well, change it or apply the same to himself. To gauge the damage of this tact simply refer back to the comments made by former Saskatchewan premier Brad Wall on election night, wherein he not so subtly let the federal Conservative Party know that leaving traditional conservative values would more likely than not result in the base bolting to a new "Reform Party - like" scenario, and the subsequent death of the federal party - aka 2 seats after Mr. Mulroney's departure. I believe this analysis is spot on, and needs to be deeply understood by those that think they are smarter than every one else within the Party.