Covid19, the great pandemic of our generations - but is it really? For the last year and a half we have witnessed the closing of the world economy, the printing of money like no other time in our history prior to 1929, and most significantly the alienating of people from one another on a mass scale. Truly, we live in the times that Orwell warned us against in his monumental work 1984. People turning against each other, families torn apart by distance, and most significantly their differing perspectives on the "virus". However, is it really the lethality of Covid that is driving the hardened opinions on both sides, or is it something more?

When the virus first broke out in BC it was relatively innocuous. The first quarter of 2020 witnessed 780 cases which broke down as follows: 299 hospitalizations; 106 of those went into the ICU wards; and a total of 108 died (presumably a number who died did so before getting to the ICU). The numbers showed the virus almost non-existent in populations under sixty years old, and of those older than eighty years old men faired significantly worse for than women. To put that in perspective during 2020, 1716 people died from drug overdoses in British Columbia (BC), 11,100 died of cancer and double that number for heart and stroke deaths. In 2020 a total of 41,148 people died in BC. Another perspective: in the most recent heat wave in BC 719 people died in 5 days read here .

Those were the early days of the virus however, and the numbers now are more significant. From BC's population of 5.1 million people a total of 2.9 million tests have been administered, 147, 705 cases have been diagnosed, 145, 200 have recovered, and 1756 deaths have been reported. You can keep up to speed on the numbers here. So in reality, the total numbers of  Covid deaths in BC, for the last year and a half, numbered 50 more than the amount of people who overdosed on drugs in one year.

As all of us watched the evening news reports back in early 2020, and witnessed Chinese people falling dead in the streets, having the doors on their homes and apartment buildings wielded shut, and their streets sprayed with chemicals, we collectively broke a sigh of relief that it wasn't here in Canada. Then it came, and we panicked. Not everyone of course. In fact many people did not take it too seriously at all, and in the summer it vanished like the seasonal flu, in the fall it came back like the seasonal flu, and now again in the summer it is vanishing - like the seasonal flu. Yet, "waves" of pandemics have been common in our species history.

Take the Spanish Flu for example. A total of 2 million Canadians, from a population of 8 million (20%) were struck with that virus. Of the 2 million that were infected 50 thousand died or 2.5%. Of the total Canadian population that percentage was .06 or less than 1%. No vaccination was ever created for the virus and it ran its course. Fast forward to today and the numbers are: Canada's population 37.74 million people; 1,417,330 Covid cases (.04% of the population); and 26362 Covid related deaths (.0007% of the population).

The Canadians that died in battle did so for our freedom. Never forget that. They fought against regimes like the Nazis, and their equally despotic ancestors in the first war. They died freeing people from the suffocating grip of the Taliban. They died protecting people from the Communist Chinese, and on it goes. Their sacrifice was the price for our freedom. However, as the old veterans die off so does their spirit.

Today we have people that are willingly throwing those very freedoms on the funeral pyre with the promise that it will lead to better things for all. Today in Canada you cannot travel freely without hitting a military checkpoint-like border installation in New Brunswick, or requesting advanced permission to enter into one province from another. Today the government of Canada is openly advocating "vaccine passports" which will imprison people without them within Canada or even within their own province. We are at the place where you need internal travel documents just like Communist USSR and Nazi Germany. In a sense, the government of Canada, and its eager minions in the provincial governments, are sticking a star of David on each of us that won't take the vaccine. What's next? Vaccine ghettos where you must live if you won't take the vaccine. This may sound alarmist to you, but think about where we were as a society 2 years ago and where we are now.

Another eyry complication of  Covid 19 is the division of opinion on how it should be dealt, or whether it even constitutes a real threat in a pandemic sense. After all, it has never happened in history before that people had to be bribed to take the vaccine with entries into lotteries as a reward for rolling the old sleeve up. These are things that should give most rational people pause to think. Yet it doesn't. People, families, friends are divided, but what is the division? The real essence of the division appears to be the belief that the rights of the majority trample those of the minority. It's an ancient problem, and one that was meant to be dealt with by the Charter of Rights and Freedoms. Yet, the Charter has simply been ignored throughout, and those that think they know best for others are cramming their opinions and policies down the throats of those that feel differently.

Let's follow their logic to its end: Eating fast food is causing an epidemic of  obesity, heart disease and death so we must ban all fast food and restaurants; driving your car could result in an accident that could injure or kill another; walking outside in the sun without sunscreen could cause skin cancer that requires hospital time, therefore denying another of hospital time, and so walking in the sun without sunscreen must be banned; and on it could go. We live in an era of unrivalled hatred, bigotry, judgement, self-righteousness, and complete disrespect for the opinion and freedom of others. These are the conditions that most totalitarian regimes came to power in throughout history. The well is being poisoned and that well represents the depth of the human kindness.

Whether you believe Covid 19 is more dangerous than a run of the mill virus or not, whether you believe it's all part of an inter-governmental conspiracy or not, whatever your thoughts and feelings on the matter are, just remember the only thing that differentiates us from the animals is our ability to be spiritual beings. Once the values of freedom, compassion and understanding have been thrown in the trashcan of convenience there is but one direction to go, and that is down. Once freedom that was paid for by the blood of generations is lost it will take the blood of future generations to restore - if at all. At this moment in history I encourage you to be the person you are and not the scared shell of yourself that is being impressed upon you. 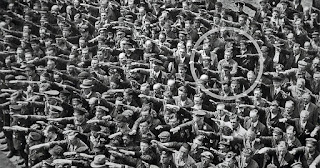 Posted by Brad Cabana at 5:36 PM No comments: