Israel has the right to exist as a nation. Let's just get that one off the table right away. Israel, or more accurately the descendants of Jacob, whom according to the Bible the Lord named "Israel", finally became a reality for the Jewish people in 1949 after a guerilla war for independence with the British Empire. Initially restricted to a tiny strip of land sandwiched between Lebanon, Syria, Jordan and its old friend/nemesis Egypt, Israel has slowly gained in territory after consecutive successful wars with their neighbors.

According to the Bible, the Lord promised Abraham (Abram at the time):

" On the same day the Lord made a covenant with Abram, saying: To your descendants I have given this     land, from the river of Egypt to the great River Euphrates." (Book of Genesis)

In other words, this: 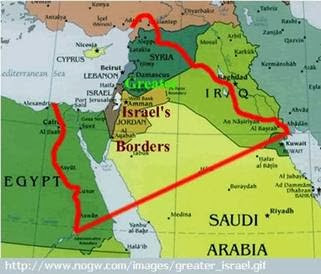 Now many people refer to this Israel as an evil "Zionist" conspiracy to consume much of the Easter Mediterranean. However, that's not the truth. It's not a conspiracy at all when it has been laid out in the Bible for Christians to follow. There are a few problems with the concept though.
The very first problem that immediately comes to one's attention is the sheer vastness of the Biblical Israel. It would include areas of the Middle East that are currently populated by between 40-50 million people, and those people have been there for thousands of years in most cases. Prior to 1939 Jewish communities were thriving in Europe, although often persecuted to one degree or another. After World War Two, and the horror of the Holocaust, there were six million less Jewish people in the world which could have helped populate a "Biblical Israel". Today, modern Israel has a population of  8.7 million people, of which 21% are Arab and another 5% are "other". On the face of things, Hitler's massacre of the Jews of Europe tended to undermine the fulfilling of  the Lord's promise to Abraham. Perhaps that was part of the purpose, but who can truly understand a hatred that deep.
Another problem, and one that haunts Israel through out the world is the Israeli government's treatment of the Palestinians, and to a lesser extent its neighbors. Again, returning to the Bible, the Lord tells Moses that before taking the Jewish people out of Egypt he must gather up all the gold and silver from amongst the Jewish people and turn it over to the Pharos in order to ease the sting of his loss - in a sense compensation. It didn't work as the Pharos chased them down shortly afterward, but Moses had done his part. So even though Moses had vanquished the Pharos, and the Exodus was happening as a matter of fact, an ethical attempt to remove the "sting" was still necessary.
Unfortunately, modern Israel has simply lost this lesson in humbleness. In fact, it can be easily argued that the government of Israel has attacked with arrogance and impunity whomever it deems as a "threat to its security". Of course it is not alone in crying wolf. "National security", "terrorism", etc are phrases that are bounced around now by many governments seeking to restrict freedoms and impose their will upon other nations. The problem for the Israeli government is that it has always claimed the high ground. It also claims to have the "most moral" army in the world. Despite the boasts, the Israeli army has been absolutely brutal in dealing with dissent from the Palestinians and others. While on the one hand it has become far more wise in its dealings with Iran insofar as it strikes critical components of their nuclear regime while avoiding an Iraq-like  conventional bombing of Iranian facilities,  it blows its own feet off by "knee capping" hundreds of Palestinians who are simply protesting, albeit angrily.
In its dealing with the protesting Palestinians and even Israeli Arabs, the Israeli government has lost all sight of  proportion, moderation and wisdom. It has committed multiple crimes against humanity during the Palestinian uprisings. It has in effect broken its covenant with the Lord:
Thou shalt not kill;
Thou shalt love thy neighbor;
Thou shalt not covet thy neighbors house,
or anything that is your neighbors.
Now, inside Israel itself, the Orthodox Jewish people are in near full revolt of the non-Orthodox Jews. Issues such as compulsory military service or observance of the Sabbath, for example have sparked deep anger. Even the idea that Israel is a nation-state has provoked joint protests with Palestinians and Orthodox Jews walking side by side against conventional Israel. In other words, the Orthodox Jewish community appears to believe that modern Israel is breaking its covenant with the Lord as well.
I suppose in the end we are just simple people,  and it isn't our place to judge a covenant made thousands of years before us between the Lord and Abraham. We can only guess and observe at whether it has been broken and what ramifications may come from that - if any. That being said, whether you agree or disagree with the approach Israel takes, we must not bring ourselves to the point of heaping hatred against them. Israel, or the "descendants of  Jacob", have a place of prominence with the Lord. Whether you agree with that is irrelevant. If you don't believe me ask Nimrod...