Economic Implosion for Newfoundland and Labrador

It's not news to anyone that Newfoundland and Labrador is in a complete financial collapse. 2003 rang in the era of reaping rewards from the oil industry for the province, but it wasn't long before a new industry, fracking, was revolutionizing the oil industry in the United States - a revolution that is still reverberating through international oil markets and alliances. In any case, the province had ten years to reap what it could before the fracking revolution really kicked off in 2013. The graph below helps show that era: 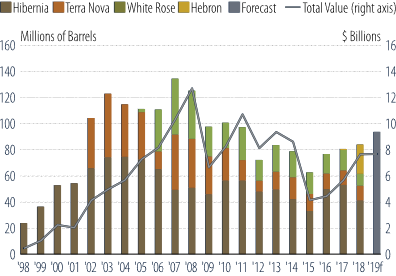 As you can see, from 1998 until 2007 the province's production was greater than the value created by those barrels. In 2008 production and value finally met, then in 2009-2010 production was again greater than value, but from 2011 until 2014 the province really reaped a massive windfall from its production. Oil's value vs production petered out after 2014 and remains that way to this day. The nuts and bolts of it is that out of 22 years of oil production, the province had only 5 years where we made money on oil by its pure value over simply producing as many barrels as possible.

All that seems a little academic now though. Upwards of $3 billion of that money the government managed to save in the bank was spent as its share of the Muskrat Falls project. The remainder was blown and no provincial rainy day fund was created. In fact, people like Danny Williams and Kathy Dunderdale often said that Muskrat Falls was that rainy day fund, and that just seems outright scary at this point. Nonetheless, given that oil's best days have come and gone, where are we left today?

49%     of the budget is funded by taxpayers income tax, sales tax,
booze and smokes revenue

18%     of the budget is funded by the federal government

That's the nuts and bolts of it. The average working person in the province and oil (a distant second) pay most of the place's bills.  A real eye opener should be the measly 4.3% corporations in the province contribute to the well being of the bottom line. Another, perhaps more ominous number is 20%. That's the amount that the province must pay on every dollar it makes to service its debt annually.

All these numbers would be enough on their own to paint a foreboding financial picture, but it gets worse - much worse. The key for the province is that 18% of oil revenue, because that revenue actually represents new wealth rather than simply recycled money. It allows the government to pay for the roughly 30% of the province's work force that it employs. Newfoundland and Labrador's 2019 budget pegged oil at $65 a barrel, but then revised it to $63. Either way, the province pretty much hit the market price and its budgeted revenue was for the most part in tact.

However, and its a huge however, once again international strategic events have blind sided the government's best laid plans. The advent of the US fracking revolution created a massive strategic shift in the control of international oil markets - specifically market share. Initially the US essentially satisfied its own oil needs, but as its fracking industry grew the US became an exporter of oil for the first time in history. It was no longer dependent on the Middle East for oil. Now, it can be easily argued, it has used its military and covert forces to knock other players out of the market to make room for its own product. Major oil producing countries like Iran, Venezuela, Libya, Syria, Sudan and even Iraq have been partially or completely removed from the oil market place. Even Russia, until fracking the largest oil producer in the world, has been targeted by US sanctions and attempts to wrestle its market share from Europe.

On March 6, 2020, Russia and Saudi Arabia decided to start an oil war. The story goes that Saudi wanted Russia to sign off on a three year production agreement that would limit each country's oil production - even further than it had already been cut. Russia backed away from that so Saudi opened the valve and promised to flood the markets, bringing Russia to its knees in the process. Russia, especially Putin the judo master, likely saw an opportunity to starve US oil companies by killing their stock values and driving them out of the markets. While all this plays out, innocent bystanders like Canada have seen their own domestic oil industries crippled in the cross fire, and by ricochet, their budgets. While this province escaped 2019 with a break even oil projection of $63 a barrel, it won't be as lucky in 2020. The graph below gives a sense of oil prices for the first quarter of 2020: 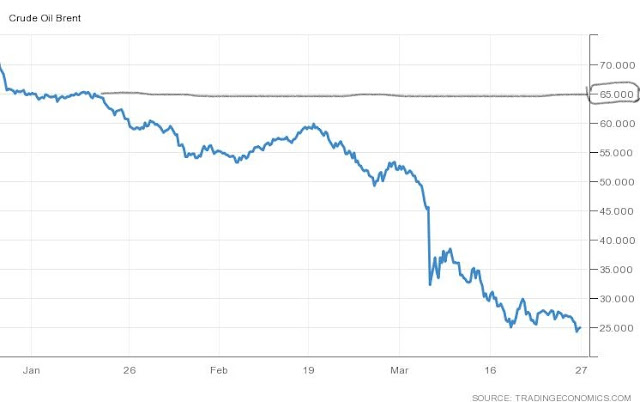 Newfoundland and Labrador's stated budget price for oil this year is $65 a barrel (US). As you can see on the graph above, oil was already falling from that point by mid January. Much of the decrease can be attributed to the corona virus outbreak in China, which resulted in oil demand from the world's largest oil importer drying up. The price continued to get worse as things got worse in China, then globally. Then, on March 6, the bottom fell right out as Russia and the Saudis threw in the towel. The market has been trying to find its bottom ever since.

The cost for the province is potentially catastrophic. The average price of oil for the first three months of this year was $51.73 per barrel (US). If oil recovers to a consistent level around $50.00 a barrel the hit to the treasury will be about $300 million. Unfortunately, as bad as that would be, there is no reason to expect either Saudi or Russia will pull back in this market share battle. If oil settles at $30.00 a barrel for the rest of fiscal 2020, the treasury will lose $600 million dollars. For perspective, the province budgeted oil revenue of  $1.09 billion, in other words the government will receive a mere $400 million or about 40% of what it had budgeted for. If, as many analysts have suggested, the price of oil drops to $25 a barrel and remains there, the hit to Newfoundland and Labrador's budget will be a striking $670 million leaving the province with a mere $300 million to fund 18% of its budget for fiscal 2020. It must be remembered that Russian President Putin has stated publicly Russia can withstand a $25 per barrel price for at least 6 years, and lower if necessary.

Now lets turn the page on oil for a moment, and focus on the Coronavirus pandemic's effect on the economy, and therefore budget. The most conservative projections in Canada place the country in a three month shut down. Many others are putting it at four to five months - likely dependent on how bad the pandemic ravages the US. Those will impact the budget:

The Newfoundland economy shuts down for 3 months, and takes 2 months to regain normalcy. The government will lose in every category of its budgeted revenue. Everything from mining royalties to personal income taxes, and all areas in between. The potential direct cost is in the vicinity of $809 million (cdn), or a 13% loss in budgeted revenue for 2020. Once combine with a $30 per barrel price for oil, the combined loss to the budget will be about 1.5 billion (CDN). Some of that will be slightly offset by the fact Newfoundland and Labrador receives its oil funds based on US dollars - but not a lot. Given the province's budget for 2020 had already pegged a deficit of $1.1 billion, a new deficit projection of $2.6 billion would not be out of the question.

The Newfoundland economy shuts down for 4 months, and takes 2 months to regain normalcy. The budgetary losses will be in the vicinity of $869 million, or a 14% budget loss. The combined loss, oil revenue included, is about $1.6 billion, or a total budgetary deficit of  $2.7 billion.

And so it goes.

None of these figures address business losses, or the compensation they may receive for those losses, or what form that compensation will take (ie: loan vs grant), or even whether or not the compensation will be taxable. It does not address the economic costs of closing the tourist industry, or potentially the fishing/processing industry. They don't reflect the costs in interest and financing of shutting down the completion of the Muskrat Falls project. It goes on and on. Bottom line, for a place that was already expecting a terrible financial year, with a preexisting $1.1 billion deficit projection, an oil war and pandemic are especially devastating. Newfoundland and Labrador risks a complete financial collapse from these turbulent times and, perhaps even more deadly for the province, a new 1980's ish exodus of people escaping a doomed ship - so to speak.