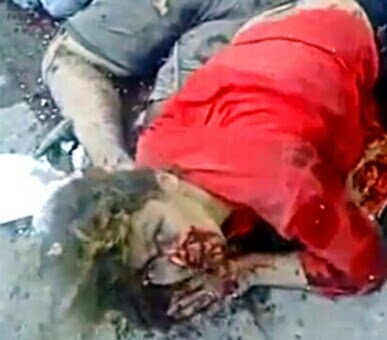 This woman's eyes have haunted me since 4:00 p.m. Ukraine time, June 2, 2014. Her name was Inna Kukuruza. She was a wife, a mother, and a citizen of Luhansk city. On that day, June 2, 2014, she made a fatal mistake walking past the City's Administration building after work. She, and many others, had her life ended in a hail of unguided rockets fired by a lone Ukraine air force jet. However, unlike the rest of those dead around her, she did not die immediately. She lay there for seconds, all filmed by the ever present phone cameras, and asked to speak with her daughter. Then she died. What the picture above doesn't show is her mangled legs, or her missing foot. She bled to death. My heart broke for her at that moment.

It was just the beginning of a campaign by the Ukraine military, and its paramilitary forces known as "National Guards", of killing civilians throughout the Ukraine provinces (known as Oblasts) of Donetsk and Luhansk. A slaughter that Europe has not seen since the civil war in the former Yugoslavia. Yet, through all the fog of war, a clear pattern has emerged. The Ukraine army approaches a "rebel" (NAF) area, normally a community. They establish fire bases around it, with varying types of artillery, and then they start shelling. It was the same in Slavyansk, Kramatorsk, Gorlovka, Donetsk, Luhansk, and every other community in the two break away provinces.

First the infrastructure is targeted. Specifically, the electrical power stations. Once these facilities are knocked out, and no power flows: sewage systems shut down; water systems shut down;  hospitals can't operate well; commerce can't function; and on and on it goes. The clear and obvious strategy is to place the citizens of the community in misery. To turn them against the NAF in a psychological warfare conducted with artillery. Of course, the artillery and its ferocity, terrifies the people all on its own.

Second, health and transportation are targeted. Bus stations and train stations are hit. Hospitals of all types are hit. Even schools are hit. The pattern repeats itself in every community the Ukraine army assaults. There is no mistake. At this point the citizens are not just terrified, but also trapped. They can't leave the chaos. They are corralled in a hell no civilian should have to suffer.

Then, the civilians themselves are targeted. Specifically, their homes, apartments, shops, and city centres. The victims have ranged from the very elderly, and in some cases mental patients, to the youngest children and everyone in between. The shells and rockets don't have a conscience - the people that fire them are meant to.

Slavyansk became the model for all Ukraine army operations since. Surround the community. Do not allow escape. And fire. Small caliber mortar fire was the start. There were many reports of it on social media, but the "main stream media" refused to report it, or its damage. As if encouraged by that, the Ukraine army brought in larger mortars, then field artillery. They got away with all that too, despite pictures of the destruction and the civilian victims flooding social media. There was no outrage, or reporting in the main media. The NAF refused to budge, so the Ukraine army brought in even bigger guns - self-propelled 152mm guns. Monsters of artillery, these weapons created massive, indiscriminate damage and casualties. Not completely satisfied with this level of destruction, the Ukraine army started using air burst white phosphorous shells at communities on the outskirts of Slavyansk, and then Slavyansk itself. The Russian government drew the line there and raised concerns about it at the UN. It was dismissed, and the  Ukraine army carried on.

Then came the battles around Donetsk city, Gorloka and Luhansk city. A whole new form of artillery was deployed - Multiple Launch Rocket Systems (MLRS). At the low end of these systems is the GRAD, and on the high end the "Tornado", "Hurricane, and "Smerch". They can fire up to 40 high explosive rockets at a time. They were designed by the Soviets to break up tank formation and create chaos. They are lethal and can level entire complete grid squares when deployed enmasse. They are also unguided. The use of MLRS took the ferocity of the conflict to an all new level, and with it a rapidly increasing civilian death and wounded toll. Pictures of grandmothers , fathers, children, and even priests - with their bodies torn to pieces - began flooding the social media. So grotesque were the results that You Tube began taking films of the victims off their site.

As if this wasn't a great enough outrage, the Ukraine army upped the ante one more time. On July 29, 2014 the Ukraine army fired four, of a reported five available, SS-21 ballistic missiles at the NAF held community of  Snezhnoe. The missiles are massive, and carry a warhead of up to 1000 lbs. They can be used to deliver nuclear weapons. In this case they carried high explosive warheads. These were designed as, and remain, weapons of mass destruction. Even the US government admitted the missiles were fired - yet they did not cause any damage. The reason? Russian S-300, S-400 anti-missile/air units on the Russian border shot them down before they impacted Snezhnoe. If the Russians had not intervened, the loss of life would have been in the thousands. It is here that apparently the US and West were prepared to draw the line on the Ukraine army. There was no condemnation by the West, but there was also no condemnation of Russia for shooting them down.

The death toll so far in the Ukraine war against the Donbass Region (Luhansk and Donetsk) was estimated to be around 10,000. The wounded many more times that. Over 250,000 refugees have fled - mostly to temporary camps lining the Russian side of the border. Those that remain are suffering constant shelling. Constant terror. But, that's the point of it - right? The Ukraine government always refers to the NAF as "terrorists", yet the only side terrorizing its citizenship seems to be the Ukraine government itself. The Geneva Convention is supposed to protect civilians and civilian institutions at a time of war, however the lawyers in the crowd claim this isn't a war. It's war-light. It's an internal insurrection. Although the Ukraine government itself has accused Russia of invading it at the UN Security Council. It would seem, therefore, that the Ukraine government considers itself in a state of war. In that case, the rules of war as outlined in the Geneva Convention should apply to them.

If, for whatever reason, the lawyers succeed and the Ukraine government is not restrained by the Geneva Convention, then there is always the International Court of the Hague. It clearly details that attacks made against civilian populations, or terrorizing civilian populations, or forcefully moving populations is a crime against humanity. There can be no doubt in any right thinking person's mind that what Ukraine has committed against the Donbass is a crime against humanity. Inna Kukuruza was a member of humanity. She did not deserve to die in that blood soaked street in Luhansk city. There was no need. She did no wrong. Her only crime was to be a citizen of a break away region of Ukraine. As far as I'm concerned, Ukraine will never be able to whipe that spot of her blood off their hands. Her final appeal to speak to her daughter, her eyes betraying her terror, the helplessness, will never leave me.