We all know things are going badly with the doomed Muskrat Falls hydroelectric dam project on the Churchill River, but just how badly are they going? Well, according to insider leaks to this blog things are getting very bad. Very bad indeed. In fact, the installation of Stan Marshall seems to have made things worse up there than better. The leaks in this blog have to do with scheduling. It appears instead of taking a cold eyes look at the project, and seeing if the project is even viable any more (it never was) Marshall is trying to ram through the schedule and creating a complete mess of the project. At least that's what the insiders are saying.

Several weeks ago I received a leak that there was no room left at the camp for workers to stay. Instead, Nalcor was offering workers $117.00 a day tax free to stay in Happy Valley Goose Bay, with the added bonus of being bused in and out of the site each day. When I received that information I thought it may be an attempt to reduce costs. Perhaps it was cheaper to pay them the $117 a day and bus them in and out. Perhaps the cost per occupied bed were so expensive it made some sort of sense.

However, the most recent leak from the project tells a different story. The insider tells me the camps at Muskrat Falls are full. Completely full and there is just no room left to accommodate anyone. That's part of the story, but there is more. Last week 100 people were flown into the site to work, but there were no accommodations for them at the camp, so they were turned around. There were also 250 people called out to work at the dam site, but they had to be cancelled because there was no place to house them. Now the big plan is to fly people who live in Lab City to the site every day, and then fly them home at the end of their shift. This plan is apparently not approved yet, but is actively being considered.

What is the problem you ask? According to my insider it is a change in Nalcor's scheduling priorities. Nalcor has ranked the three main contractors in a priority triage: first priority Pennecon; second priority Pomerleau; and last priority is now Astaldi (the main contractor). In fact, it is so bad for the prime contractor Astaldi that they have been reduced to 140 bunk beds at the camp and have had to lay off 30% of their workforce on site. This at a time when they are being hammered for being behind schedule.

All of this gives a bit of context to the new lawsuit filed against Nalcor this week by Andritz Hydro Canada Inc, an Austrian company. According to the lawsuit Nalcor demanded Andritz get on site and install the gates to the water ways at the Falls. Andritz explained to Nalcor, and Nalcor must have known, that Andritz could not install the gates until Astaldi had completed the cement works the gates were to be attached to. Andritz went to the Falls, inspected the work, and found the work to not only be incomplete, but also a large number of deficiencies with the work. Therefore, they informed Nalcor they couldn't proceed until the work by Astaldi was finished properly. According to the lawsuit Nalccor then threatened to call in Andritz's $20 million performance bond - so Andritz sued Nalcor.


Given this lawsuit, and the insider leaks coming from the project, it seems quite obvious that Nalcor's project management is desperately trying to drive the project ahead rather than fixing the issues at hand first. In doing so Nalcor is creating a real nightmare out of the scheduling and therefore cost process. Andritz's lawsuit is a result of that. Given Nalcor's decision to deprive Astaldi of the camp space needed for their staff it won't be long until we see a major lawsuit against Nalcor by Astaldi. Logically, how can Astaldi be expected to cure its scheduling issues if it can't get space to house its workers and has to lay off 30% of its staff at the project? In other words, due to very serious mismanagement of the project by Nalcor, contractors are now piling up against each other on the site and any efficiencies of the project's construction are out the window.

The news on Muskrat Falls just keeps getting worse all the time. Thank-you to the insiders at Muskrat Falls, good Newfoundlanders and Labradorians who are troubled by what they see where they work and the impact it will have on all of us, for emailing me and getting the information out there. If you are up at Muskrat Falls, and you see something we should know, please email me right from this blog page. I'll keep your name out of it, I promise, and we'll let the people know what's going on up there.

FROM ASTALDI TO ITS STAFF: 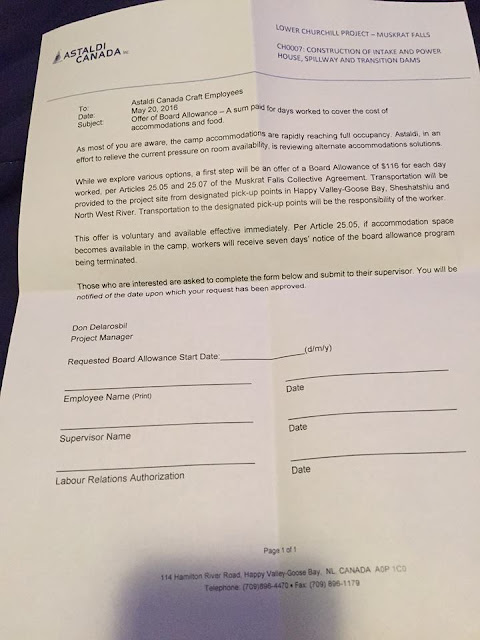